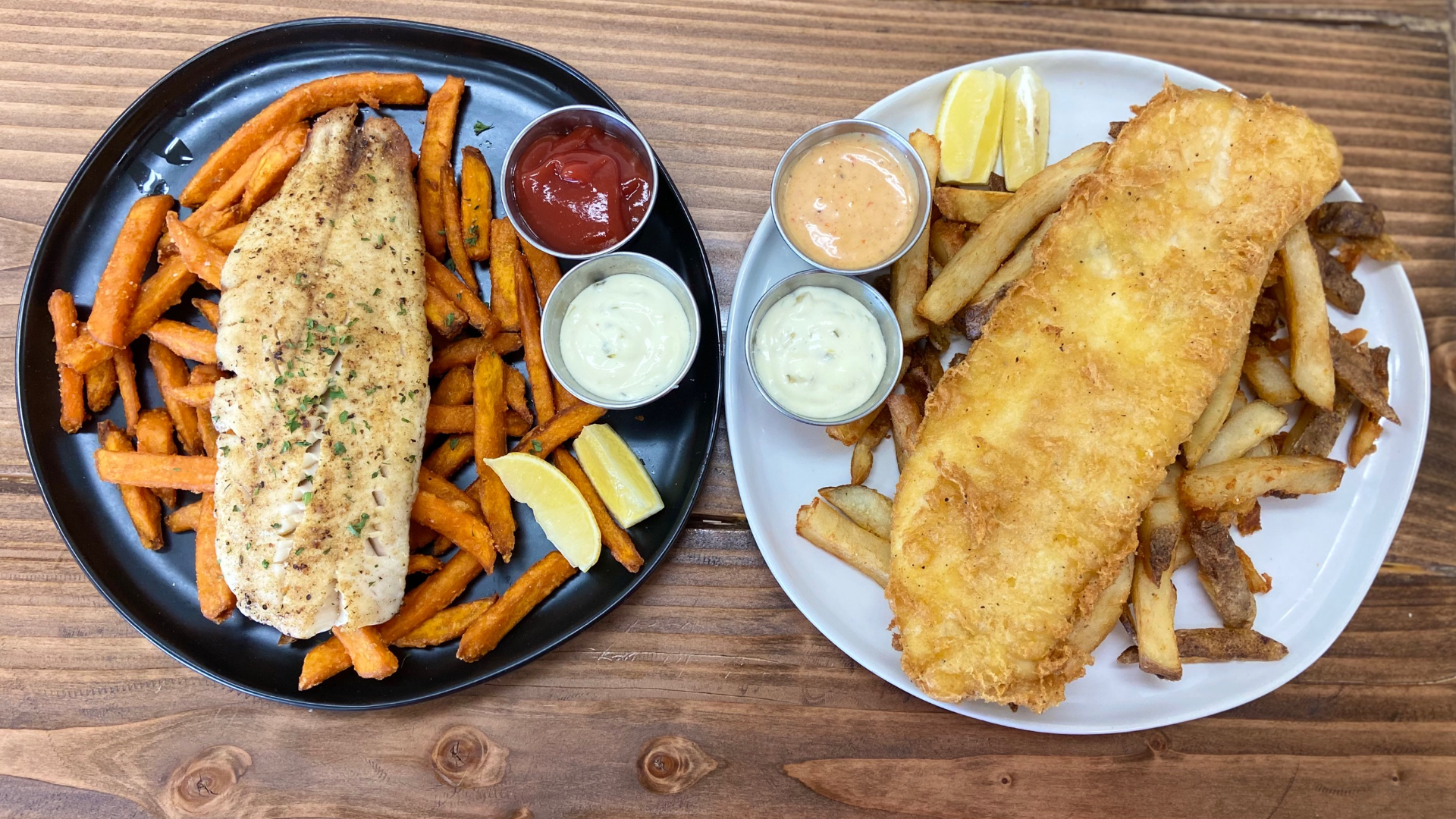 RENTON, Wash. — More than 8,000 miles from where it was first created, Australian fish and chips are sizzling in Renton.

“It saves you about 20 hours of flight time,” laughed Xenos Nair, owner of Salty Blue.

The small independent restaurant opened in March and specializes in what Nair said are the same menu items you’d find in Aussie fish and chip shops.

He's loved the cuisine for most of his life, despite not having an accent.

"People come in here and they're like, 'You're not Aussie!' I know, I know, but I'm a neighbor of Australia!” he said. “I was born in the Fiji Islands and I have a lot of family in Australia and New Zealand. I spend a few months there every few years, and it's one of those things that I wanted to bring that flavor profile here."

Credit: Kim Holcomb
The menu at Salty Blue is inspired by traditional fish and chip shops in Australia, where owner Xenos Nair has eaten throughout his life.

That starts with importing the fish itself.

Salty Blue features Hoki, a type of cod found in the waters off New Zealand.

Another nod to Australia? The fish and chips are served as filets rather than in pieces.

“(Customers) open the package and it's like, 'Yes! This is amazing,’" Nair said.

The condiments are made from scratch, including a seasoning found on Aussie restaurant tables: chicken salt.

"It's just an umami flavor that you keep eating, and you're wanting more, and wanting more,” he said. “People are pretty addicted to the chips."

The cooking options are also different – customers can order their fish fried, grilled, or crumbed.

If you don't feel like seafood, there's a top-selling Chicken Schnitzel sandwich.

Credit: Kim Holcomb
The chicken schnitzel sandwich is a popular item - similar to German weinerschnitzel, it subs a chicken breast for pork and is served with pickles and house sauce on a toasted bun.

A popular Australian side dish is also available: potato cakes – sliced potatoes dipped in wet batter and fried to perfection.

"It's like the edge of a lasagna - everyone wants that edge piece where they get the crispiness and it’s soft inside. It's that, and it goes really well with beer,” Nair said.

The dishes are currently served to-go, for pickup or delivery.

Credit: Kim Holcomb
Nair imports Hoki for his menu - a type of cod found off the coast of New Zealand.

For Nair and his wife, Salty Blue isn't just a restaurant. It’s a belief that even when cultures are oceans apart, food can always bring people together.

"It's a big dream come true, it's something that's been in the making for about ten years,” he said. "We're here now, so hopefully we're here to last."