A Kirkland resident hung a banner on one side of the bridge with a picture of a shark saying "I eat trucks." The bridge is listed as "Truckbane" on Google Maps. 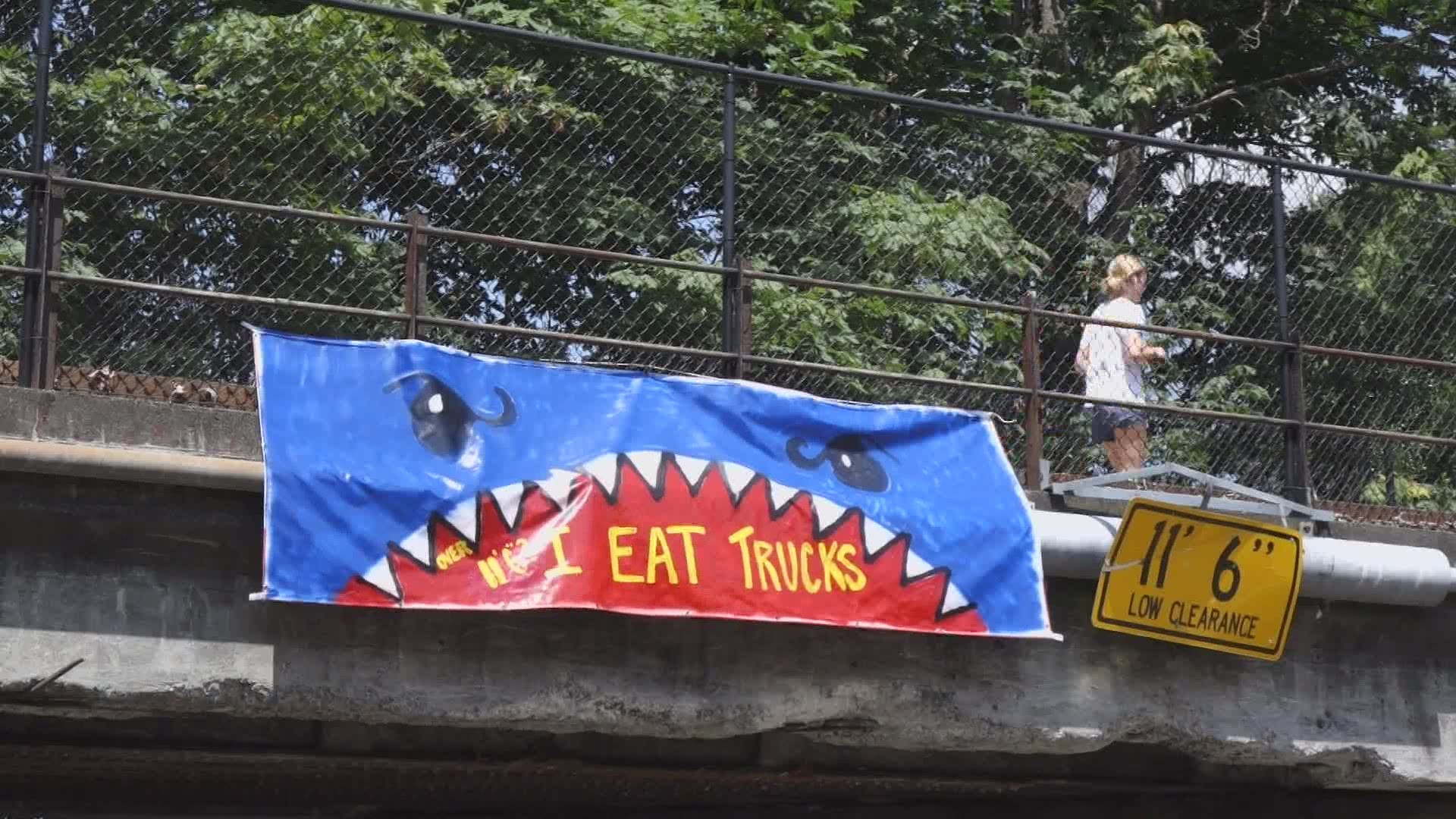 KIRKLAND, Wash. — An old bridge in Kirkland is making an enemy of truck drivers from all over.

The bridge doesn't meet the standard 14 to 16 feet height requirement, and residents say trucks crash into it on a weekly, almost daily, basis, despite over a dozen signs warning of the bridge's 11-foot-six-inch height.

Robert Onaga lives just across from the bridge. When asked about the last time he saw a truck crash there he said "Oh, yesterday. Yesterday evening."

"First you'll hear a grinding metal crunch and also what sounds like thunder, a rumbling, but you'll feel it too, it shakes the ground," Onaga said. "You'll hear sirens every now and then as they cordon off the area, once a week for a major crash, but probably every other day for a small minor crash. I would wager this bridge has probably seen at least 2,000 trucks hit it."

On Google Maps, the bridge is called "Truckbane" or "Kirkland's Truck Eating Bridge." There are several Facebook pages and most recently an Instagram account dedicated to it.

The bridge was built 80 years ago as a railroad bridge which was converted into a pedestrian and bicycle trail within the last decade, according to Kirkland City Councilmember Toby Nixon.

"It seems to be increasing, it used to be just a few times a year," Nixon said.

Although the bridge's height poses a major issue for truck drivers, tearing down the bridge would displace pedestrians, and lowering the road isn't possible because of buried utility lines.

"It's a very difficult problem, removing it would be very expensive and the city council has decided there are other public safety projects that are a higher priority, especially when we have seven brand new signs in both directions," Nixon said.

Crash records indicate drivers ignored the bridge's warning signs or are unfamiliar with the area. A community advocate, Barbie Collins Young, decided to take safety measures into her own hands and tied up a banner on the west side of the bridge, depicting a shark saying "I eat trucks!"

"Well it's been kind of a community pet project because we've all been sitting back and watching truck after truck crash into it and create damage to the trucks, to their lives and to that bridge too, but a little cognitive psychology never hurts," Collins Young said.

Residents say they believe the banner is already deterring some crashes. A truck crashed into the east side of the bridge on Tuesday, which Collins Young said residents plan to put a banner on next.