Crowd, chaos, protest and police - Suddenly, I was living in the CHOP

The situation in Seattle's Capitol Hill Organized Protest zone is multifaceted, which as a resident in the Pike/Pine corridor, I'm a witness to every day. #newdaynw 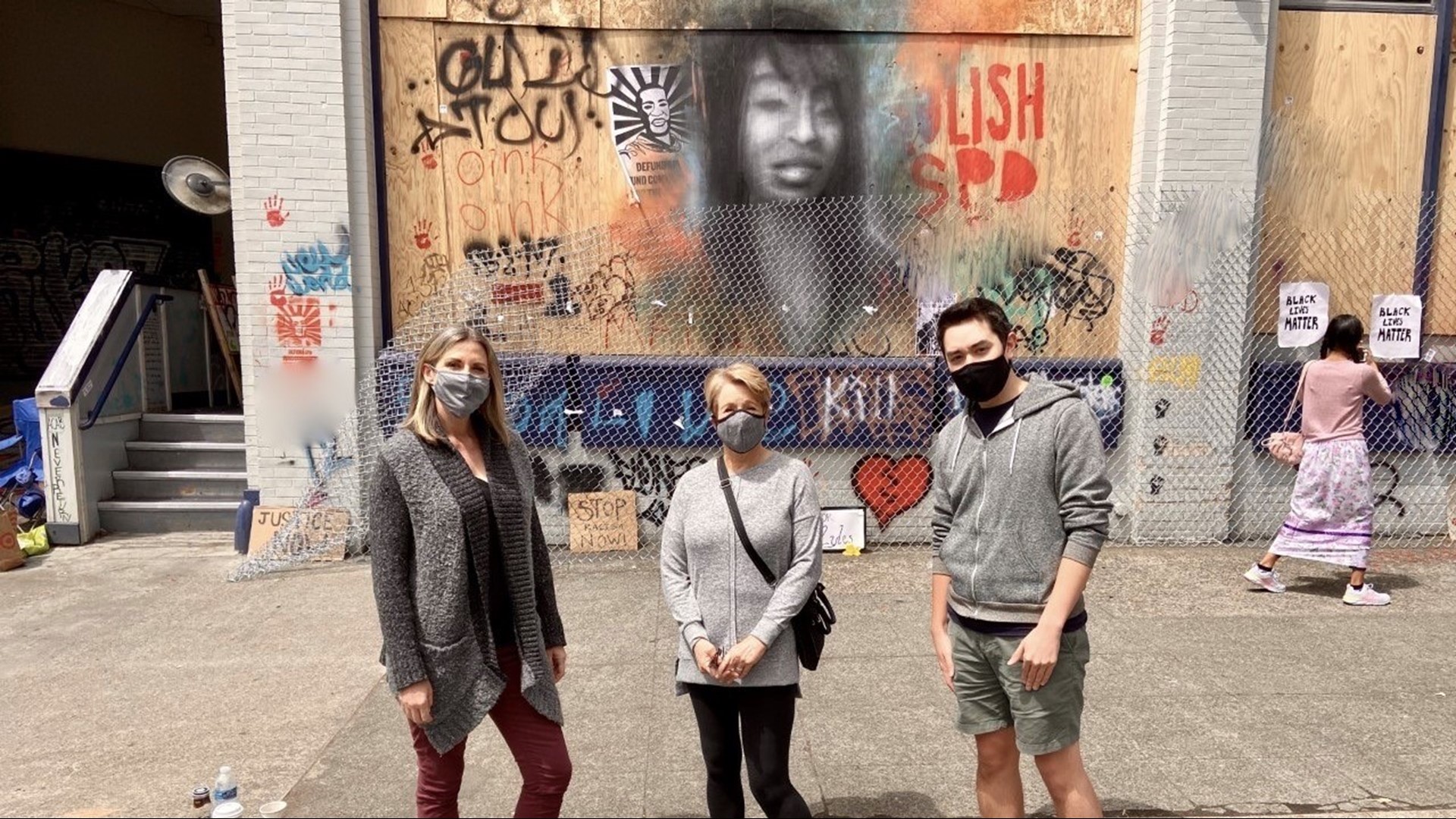 SEATTLE — I've lived in the Pike/Pine corridor of Seattle's Capitol Hill for about five years, but none of that could have prepared me for suddenly finding myself living in the middle of the Capitol Hill Organized Protest (CHOP)!

The CHOP is an incredibly complex situation with a lot of different facets. This account is just my perspective as one of many of the people who live in or have visited the CHOP.

This whole situation started several weeks ago when protests over police brutality and the killing of George Floyd broke out in downtown Seattle. Although the violence was happening downtown, that night is when Seattle Police chose to start barricading their East Precinct on Capitol Hill, which I just happen to live across the street from.

As time went on, more and more protesters would come up to Capitol Hill. Night after night the crowds would just get bigger and bigger, and tensions between police and protesters only continued to mount. The first night SPD used tear gas against protesters, I had to rush over to shut my windows to make sure the gas didn't come inside my home. Soon after it was announced police would stop using tear gas, I breathed a sigh of relief.

The next night I fell asleep on the couch. Just before midnight, I woke up to screams and loud bangs just outside of my window - police were using tear gas and flash bangs again. I was stunned to see all of the smoke rising up from the streets of my neighborhood. I went to bed that night thinking all of this would have to stop, how could this violence possibly continue?

The very next day change did come to Capitol Hill, although it wasn't exactly what I was expecting! That afternoon I saw a moving truck pull up to the precinct, this was the beginning of Seattle Police moving out of their East Precinct.

So it was either that night, June 8th, or the next morning June 9th when the CHOP was born. Neither myself nor social media knew what to call this budding area at the time, originally it was dubbed Free Capitol Hill or the CHAZ (Capitol Hill Autonomous Zone).

Police left all of their fencing and barricades behind. It did not take long at all for protesters to commandeer these items and start to use them against police. At first I felt relief because all of the riot police were no longer outside of my window. But that relief quickly converted into anxiety because it was clear the CHOP was quickly growing into something no one could predict.

What was once police with guns outside my window quickly turned into armed civilians standing watch outside my window, protecting the south barricade on 12th into the CHOP. I've said I didn't feel safe with all the riot police outside, but I also haven't felt safe with all of these protesters outside either. My main concern is that whenever police return to take back their precinct, violence will erupt.

Over the past two weeks, when I would witness police try to come back into the CHOP, the crowds would get really angry and scream. I really do fear for the safety of residents, protesters and police alike whenever it is police do come to take back the East Precinct.

As June continued to go on, more and more people were coming to the CHOP. Some to make their voices heard, others just to take in what was going on. It was at this point I really could not believe I ended up living in the middle of all of this. I am a producer at KING TV's New Day Northwest and worked in the newsroom for years prior to that. Even for someone who works in TV, when you step out your door just to go get groceries and you see a network reporter doing a live hit right outside your apartment... it's a pretty surreal experience.

Working as journalists, we are all naturally curious about the world around us, and we all really do want to relay what we see and hear as truthfully as possible. My friends and coworkers Kim Holcomb from Evening and our host Margaret Larson both reached out to me separately letting me know they too wanted to visit the CHOP to see what was going on and to listen to the people here.

I wanted us to take this picture in front of the beautiful painting of Charleena Lyles on the side of the East Precinct. If you don't know about what happened to Charleena, I suggest you read about what led up to Seattle Police shooting and killing her.

As I write this, the CHOP still exists just outside my window. Mayor Jenny Durkan has said the CHOP will come to an end soon and that police will take back their precinct, maybe even as early as next week.

While I do have some mixed feelings about the CHOP, I do realize it's going to take radical change to help fix some of the problems in our country right now. And with gun violence becoming more prevalent here, three shootings within blocks of my apartment over the last several days, I just hope no more lives are needlessly lost before the message of the protesters here is lost.