Ciscoe gives his tips on keeping your Dahlias healthy in the wintertime! 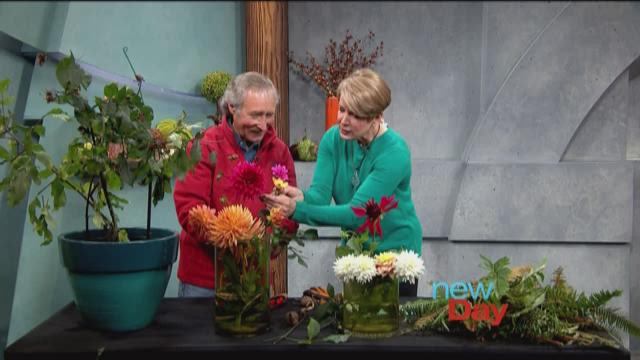 Our good friend Ciscoe Morris is back from a trip leading tours in Ireland!

He joins on us on New Day to talk about growing Dahlias and how to keep them healthy during the cold, winter months.

If you don't grow Dahlias, here's why you should: There are over 10,000 cultivated varieties to choose from including almost every flower color imaginable, flower size ranges from golf ball to dinner plate diameter, and there are 15 different flower forms including spidery, pom-pom and water lily shapes. The plant size varies from foot tall dwarfs to over 20 foot giants and some varieties feature colorful red foliage, making them great plants for the mixed border. Not convinced that you need dahlias in your garden? They bloom nonstop all summer long and the spectacular blossoms are long lasting in flower arrangements. They're easy to grow. Plant in a sunny location, fertilize every 6 weeks with alfalfa meal, water regularly, protect from slugs, and make regular bouquets so that you don't have to deadhead spent flowers. In fact, the only difficulty in growing Dahlias is deciding which new one to try!

Most experts recommend digging and storing the tubers to protect them from wet, cold winter conditions that can cause the tubers to freeze or rot. Since I'm too lazy for all that fuss, I leave my Dahlia tubers to overwinter in the ground and I rarely, if ever, lose one. The trick is to cover the tubers with a 6-inch pile of evergreen fern fronds immediately after you cut the dahlia stems to the ground. Don't forget to put a rock on top of the fronds to keep them from blowing away. Fern fronds are a great insulator, but most importantly, they repel water keeping the tubers dry enough to prevent them from rotting in our wet cold winter soil. You can use this method to protect Cannas and several other barely hardy bulbs as well. Be warned that this method may not work if you live in an extremely cold area, or in heavy poor-draining soils. Hey, even if it fails, think how fun it'll be choosing replacement Dahlia varieties next spring.

The one problem with over-wintering Dahlias in the garden is that after several years Dahlias left undivided begin producing smaller, less spectacular flowers. That's a sure sign the plant is getting root bound and your Dahlia needs dividing. Dig up the root stock in fall after the leaves and stems turn black. Tap off the soil and dry the clumps in a frost-free area for at least 3 days before beginning the dividing process. First, discard the shriveled original mother tuber and any other broken, rotten, or shriveled ones. Next, divide the root stock, either into individual tubers or into chunks containing several tubers. However you do it, make sure that the tubers in the division are attached to a stem from the previous year, as those are the only tubers that produce growth. Store the divisions in plastic grocery bags. Don't add peat moss or any other substance. Tie the top of the bag making sure there is plenty of air trapped in the bag with the tubers which will maintain enough humidity to keep the tubers from drying and shriveling. Store the bagged tubers between 40-50 degrees. Untie the bag once per month, and if any tubers are shriveling, spritzer them with water from a spray bottle. If any long stems emerge from the tubers in storage, snap them off right before replanting in early May. Then start doing your push-ups. You'll need strong arms to carry all those enormous Dahlia flowers into the house for bouquets.