Find out how you can join Northwest Harvest, KING 5 and local partners like AT&T to end food insecurity for people in our state. Sponsored by AT&T 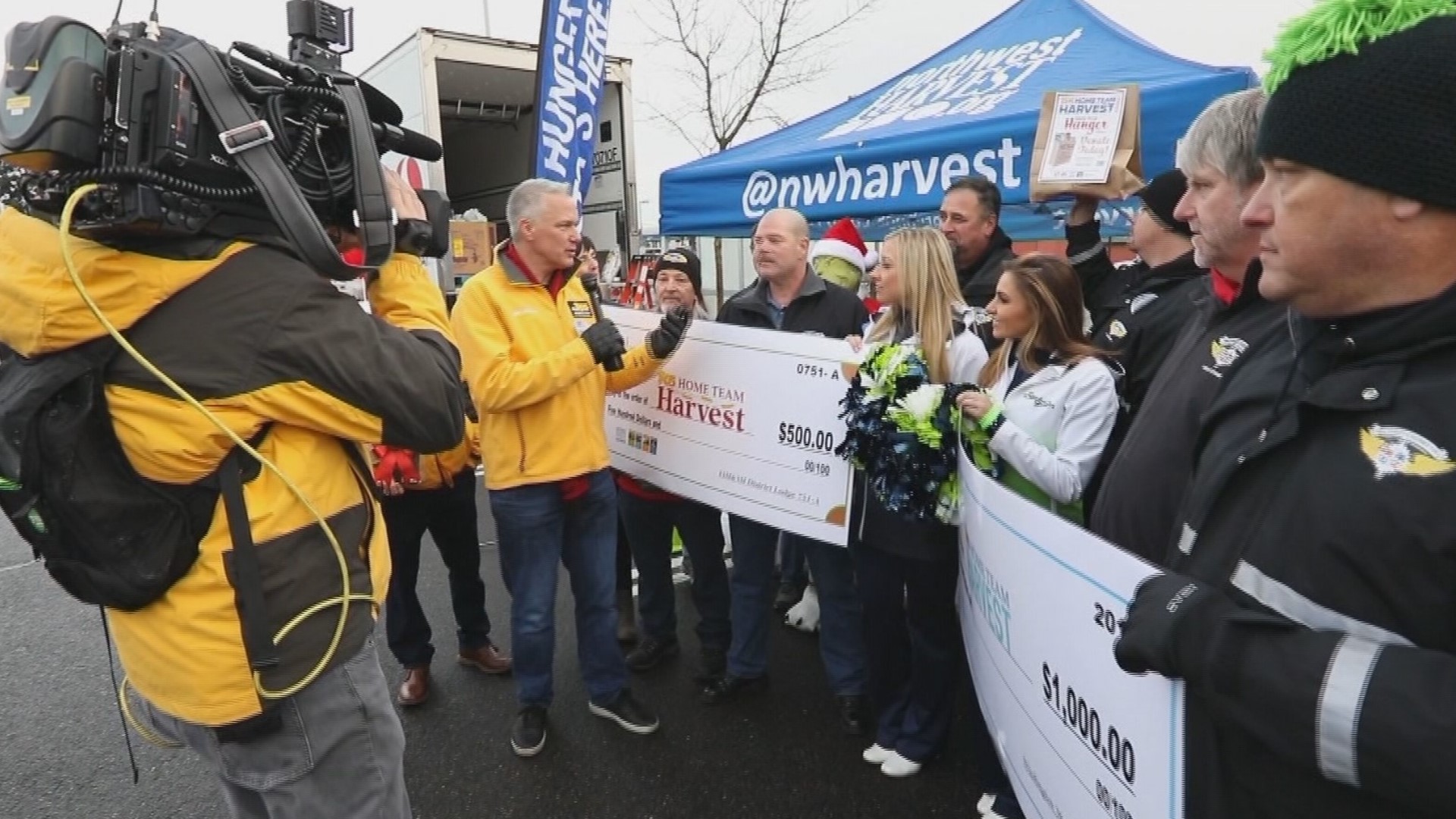 SEATTLE — After distributing more than 6 million meals to food-insecure families in the area last year as part of the Home Team Harvest campaign, KING 5, Northwest Harvest and local partners like AT&T have set an ambitious goal for this season: Provide 7 million meals to our neighbors in the community.

“One in 10 Washingtonians are food insecure,” said Northwest Harvest CEO Thomas Reynolds. “It used to be one in eight, but still one in 10 is way too many. One out of every six children experiences hunger or the risk of hunger at some point throughout the year. We just have to figure out a way to end that.”

KING 5 employees will be collecting donations at six area locations on Saturday, Dec. 7. Can’t make it on Dec. 7? You can also participate by:

“Canned goods, especially proteins, really matter,” Reynolds said. “And if it can be low sodium that really helps with family health.”

AT&T has a long history of community service and philanthropy.  In Washington alone, employees volunteered over 42,900 hours of personal time in 2018, equating to about $1 Million dollars. This year, they are proud to launch AT&T BELIEVE Seattle, a program focusing on addressing homelessness, food insecurity, gender equality and diversity in the Seattle region.

“Believe Seattle is a home-grown initiative that we did locally, grassroots, starting from the ground up with our employees,” said AT&T's Morgan Collins, These are communities where our employees live and work, and we want to give back.

“So we've done two events – just recently we harvested over 40,000 pounds of fresh produce that went to our local food banks, including Northwest Harvest. And then we did a partnership with Northwest Harvest last month in terms of gathering food at our local AT&T offices.”

“I think businesses in the Seattle area are acutely aware of their need to provide help to our communities," said Reynolds, "And I see companies like AT&T stepping up and making a very big difference.”

Northwest Harvest is rethinking the process and experience of the distribution of food to those in need. This year. they opened the SODO Community Market. It has all the trappings of a conventional grocery store, except everything is free.

“It is a replacement of the food bank idea,” Reynolds said. “People come shop, they pick up fresh produce, fresh milk, protein, and they check out. The only difference is you don't pay when you leave."

Reynolds said the new store has given its customers some sense of dignity back, "Three weeks after it opened there was a multigenerational family getting their picture taken in front. I never saw that at the old place. It really shows how valuable it is to the community.

“I think food is our currency, but it's really respect, dignity and a sense of oneness that we all belong to the same community that matters.”

Donations to Home Team Harvest are being accepted through the end of the year, or year-round via NorthwestHarvest.org.

KING 5 Home Team Harvest
1 in 6 Washington children struggle with hunger. But with your help, we can make an impact. Northwest Harvest works with more than 375 local food banks and meal programs across the state to distribute food to people in need. Together, we can help our neighbors.Together, we can reach our goal: 7 million meals for Northwest families.
King5