The man, and the dog, bringing an Italian delicacy to local chefs 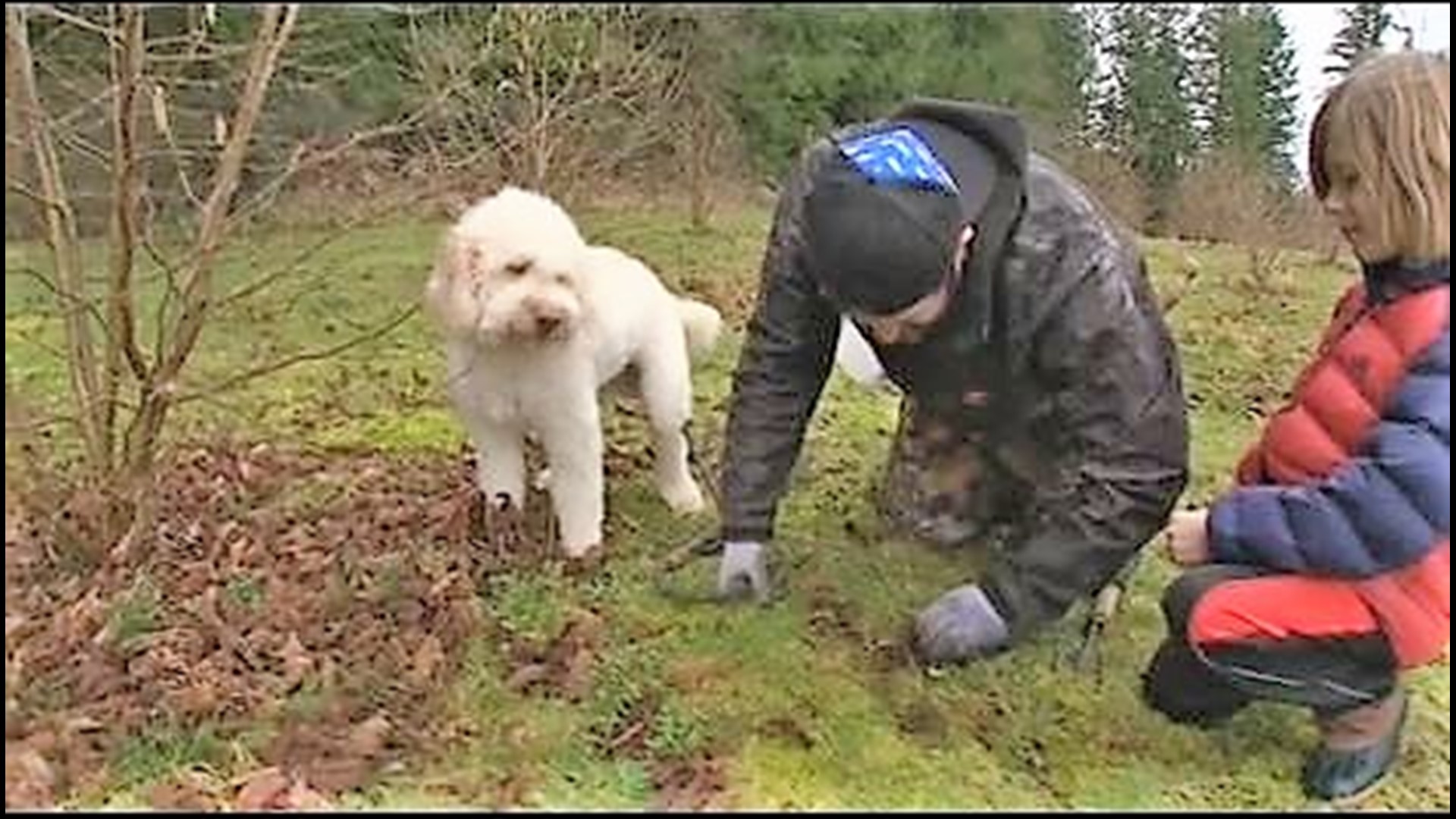 EVERETT, Wash. — It might look like Mike Davis is walking his dog. But he’s hunting for treasure. “We're looking for truffles. And not chocolate,” he said as he began his search with his son, Hawk, and dog, Aldo.

Mike is a truffle farmer. He’s domesticating a delicacy that's usually foraged wild, in the forests of the Pacific Northwest. He uses his dog, Aldo, to search for the fragrant fungi. Aldo is a Lagotto Romagnolo, a breed of Italian water dog that’s skilled at finding truffles, which grow underground. When Aldo sniffs one out, he does one little scratch in the dirt. It signals a perfectly ripe truffle is somewhere in the soil below. Using a dog is preferable to raking for truffles; dogs find ripe ones, while raking disturbs the whole crop, indiscriminately.

Mike’s truffle farm is acres of hazelnut trees, with roots inoculated with truffle spores, that he planted four years ago. Mike's not growing just any truffle - he took a gamble and planted a type that's never been grown in Washington:

"We're the first to produce the Italian white truffle in Washington State.”

Italian whites can be worth more than 900 dollars a pound.  Far more than the ones that grow wild in the Northwest.

“Our local truffles are very good, but to the high-end chefs prefer an Italian truffle,” said Davis.

He harvested his first truffles in November of 2018, and his four-year-old gamble may be paying off, based on the bounty he dug up on our visit. One hole yielded seven of the knobby, dirty delicacies. Davis says the hunt is as addictive as eating them:

“Every truffle you find is exciting. Where's the big one, you know?”

This truffle farmer is hoping to build a legacy he can hand off to his son, growing and mining culinary gold.

“It's gold that comes back every year, and it's just exciting."

One of the first places to serve Davis’ truffles is Capers + Olives in Everett.

Owner and chef Jimmy Liang got some of that first harvest in November.

"He brought me a couple of beautiful ones. I made some for Thanksgiving for my family, oh man. They were like stunned. It was really good,” said Liang.

Liang prepared a sage butter pasta with shaved truffle, and hangar steak with a truffle sauce, all with Davis’ truffles. 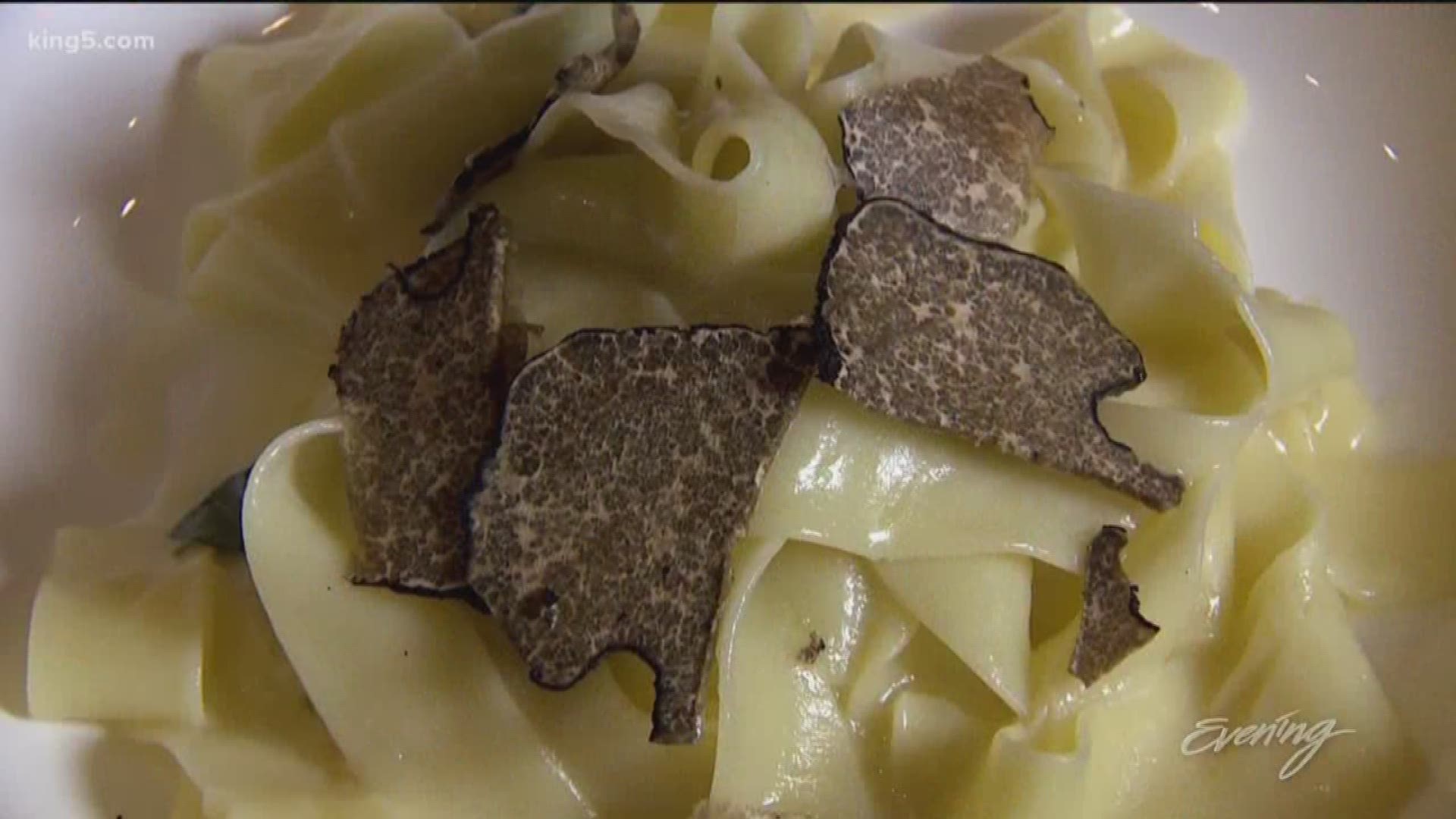 “They say kings used to eat them like potatoes,” said Davis as he watched Liang make the meal.

Davis hopes that being able to cook with his freshly harvested local Italian truffles instead of ones that are flown in from Europe will be a game-changer for local chefs. But meanwhile, he’s enjoying the earthy aroma and taste of his own bounty during a truffle feast fit for a king

To find out more about Mike Davis and his truffle farm, email him at seattletrufflecompany@gmail.com or follow him on Instagram.