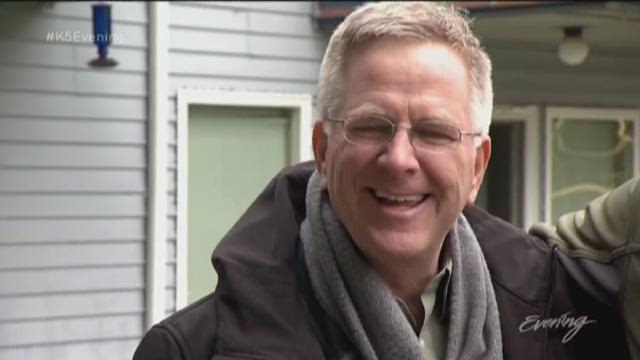 “Everybody says if you consume more, you're happier. But that's not the mark of a very thoughtful person,” says Rick Steves.

For more than twenty-five years Steves has hosted the most popular travel series on PBS. He's also earned a fortune with his best-selling European travel guides.

But money --as they say-- isn't everything.

Which is why we're meeting him at Trinity Place, a housing complex Steves has owned since 2005. Its residents are 24 struggling women and kids who need transitional housing and the kind of services the YWCA provides.

“I'm afraid a lot of these women would be homeless.” Says Mary Anne Dillon.

“It's been a godsend honestly,” says Tamra. A year ago she was homeless and recovering from addiction. Her kids were in foster care.

“Trinity Place means being able to have my kids with me and being able to raise them and be a mom again and get my life back on track,” she says.

“Moms have big hearts,” says Steves. “Love dominates their outlook and they've got kids in their laps, there's got to be a way to support them.

Steves, 61, figured the complex would make a great retirement nest egg. In the meantime, he could do a lot of good.

“I get huge joy out of going to bed thinking 'Hey, I'm helping house 70 people that would be in cars or motels or in people's basements scrounging around',” says Steves.

He'd always planned to will Trinity Place to the YWCA. But the other day Steves changed his mind. He's donating his nest egg --the complex-- right now, while he's alive.

“I don't think it's particularly loving or saintly to house people,” says Steves. “I just think it’s enlightened. I want to get a return on my money."

Sometimes a good investment can't be measured in dollars and cents. Steves is investing in people and community. And he says it couldn't be more rewarding.