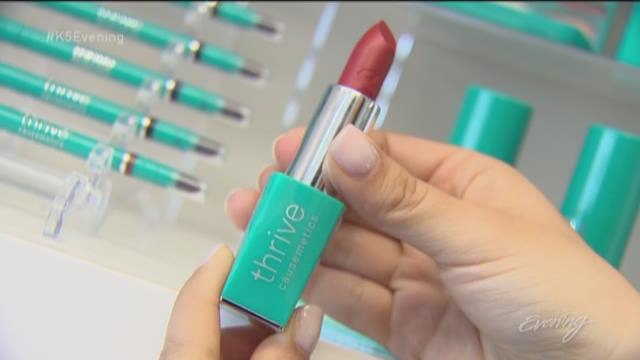 During a photo shoot two years ago, their model was also part of the mission.

"I had beautiful long blonde [hair], which was nice, but I also had really long lashes as well," said model Lauren Lichon.

Those were features Lauren loved but lost after being diagnosed with alopecia.

She tried traditional false lashes, but they wouldn't stick to her bare skin, a problem also faced by women going through chemotherapy.

That's where Thrive Causemetics came in with a handful of toxin-free, cruelty-free vegan products designed to work for everyone.

And for every item sold, one product was donated to a woman with cancer.

"We're more than just your traditional cosmetics company, and we're truly for a cause,” said Bodnar.

And the company has been expanding and thriving ever since the beginning.

"Since we last met a couple of years ago,” Bodnar said, “we've come out with 50 new products which is so exciting!"

Lip gloss, lipstick, eye shadow, blush, and so much more -- a full line of products, now being worn by celebrities, and earning Bodnar her own name in print as one the country's top young entrepreneurs.

"Last year, Shonda Rhimes guest-edited the September edition and chose us, Thrive Causemetics and myself, to be part of the Awesome Women Awards,” Bodnar said.

As her line has grown, so has the giving, by expanding to women dealing with domestic violence, and continuing the mission of empowerment through beauty.

Bodnar said having that mission was key to her success.

"The number one thing is know your 'why,' know why you started," Bodnar said. "You have to hold onto that 'why'. When you're working at 2 a.m. and there's no one else there... Knowing your 'why' is the most important thing when you're starting a company."

In less than three years, Thrive Causemetics is fulfilling its mission and then some.

This story is brought to you by U.S. Bank. #PowerOfPossible