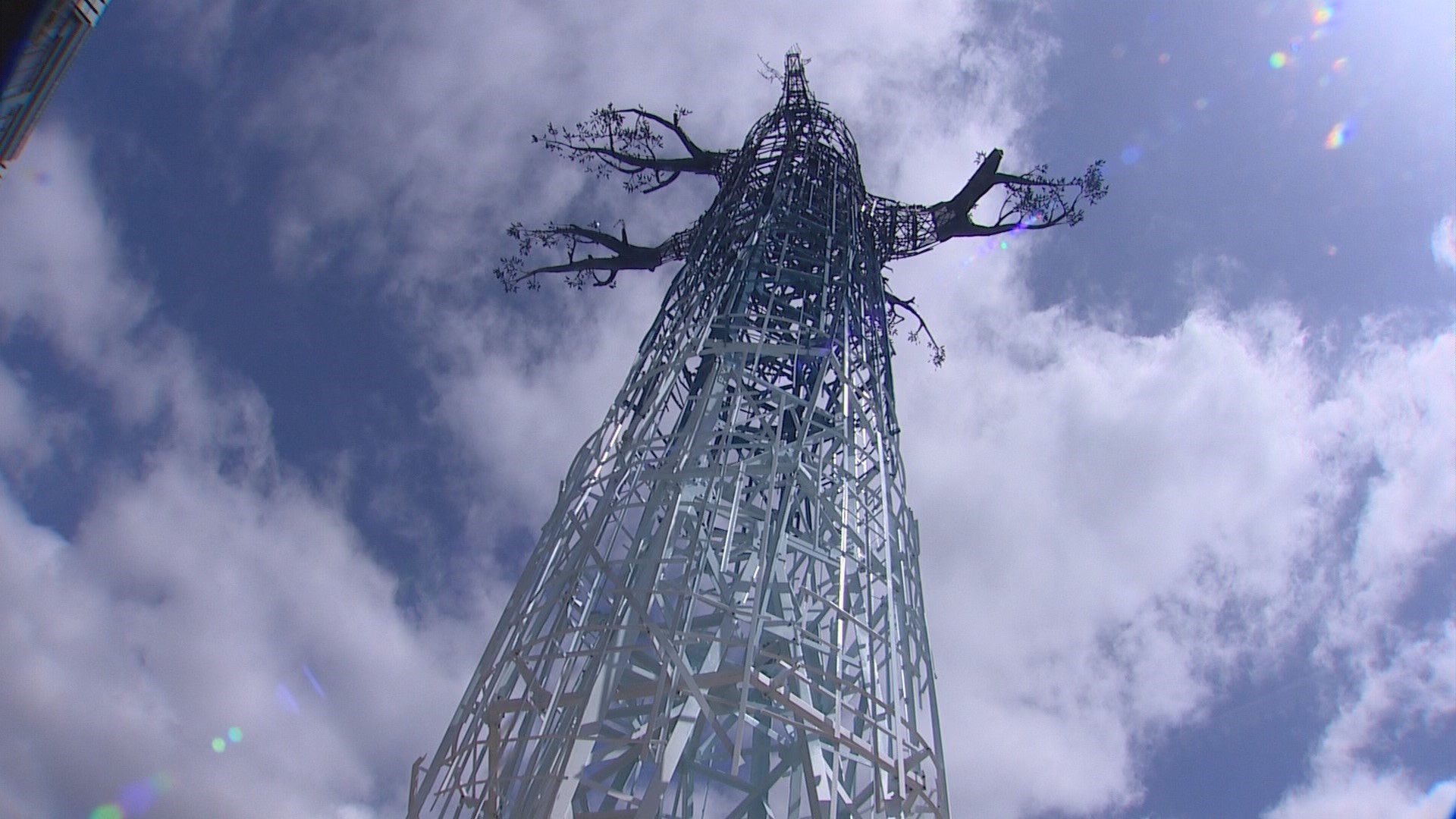 SEATTLE — EDITOR'S NOTE: This segment originally aired in May 2019, prior to the COVID-19 pandemic.

The Space Needle's got company. The sleek, modern Denny Substation looks like a spaceship that just landed in South Lake Union. So any art that accompanies the project must rise to the occasion.

"It's a remarkable piece," said Randy Engstrom, director of Seattle's Office of Arts and Culture.

"It's taller than I thought it was going to be," said Patricia Thenell, a resident who lives in Mirabella next door.

it's 110 feet tall to be exact, the tallest public art in Seattle pays tribute to the forests of the past while pointing to the electric power of the future.

"This is the real scale of the largest Douglas fir trees that would have been here. This is only 1/4 of its full-size, which would have been 400 feet tall," Daniel Mihalyo explained.

Mihalyo along with fellow artist Annie Han created the piece in their Seattle studio. The steel skeleton was trucked in from Northwest Steel Fab near Spokane.

The artists collaborated for more than 20 years but this is by far their largest work.

"It's been really thrilling to see it just be part of the city now," said Mihalyo.

"Transforest" can be seen from I-5 and about 10 blocks away, straight down Virginia Street.

"Part of our job as artists is to be bold and take risks. I think we are in a really interesting moment for the city where we are experiencing growth and change at a rate we haven't seen in 100 years," Engstrom said.

The work brings together Engstrom's Office of Arts and Culture, the City of Seattle, Seattle City Light, and Han and Mihalyo's "Lead Pencil Studios."

"The conversation this piece is having about the tension between the natural world and the needs of a growing city is a really powerful statement about the kind of place we all get to live in," Engstrom said.

And it IS creating a buzz, especially next door. Thenell had a front-row seat for the year-long construction from her eighth floor-balcony.

"Pretty soon, that's gonna be their touch point about how to get up here. You know, just come to that! And I think those are good. And I think it will grow on people."

Birds are already giving it a go.

"There's a red-tailed hawk landed there last week. Residents there (at Mirabella) are very keen on what's happening. So they'll be watching. And they've already noticed that hawks are taking interest. It is a great perch to build a nest from," said Mihalyo.

Birds are welcome to make it home as it was inspired by the ancient trees that used to tower above the very spot. The faded paint from light at the base to dark above represents a mountain mist.

Seattle's tallest public art is both old and new

1 / 9
KING 5
At 110 feet tall, the 'Transforest' celebrates pay tributes to the forests of our past and and the electric power of the future.

"I'm also really proud of the city that they support work of this scale and ambition. I think it's risky on the part of the city to embrace work like this because it's so noticeable. And I think you don't find cities very often that will do that. It makes me proud to live in Seattle," Mihalyo said.

You may have also seen Lead Pencil Studio's work at the U.S.-Canada border. Their "Non-Sign II" is a classic use of anti-space.

EDITOR'S NOTE: This segment originally aired in May 2019, prior to the COVID-19 pandemic.