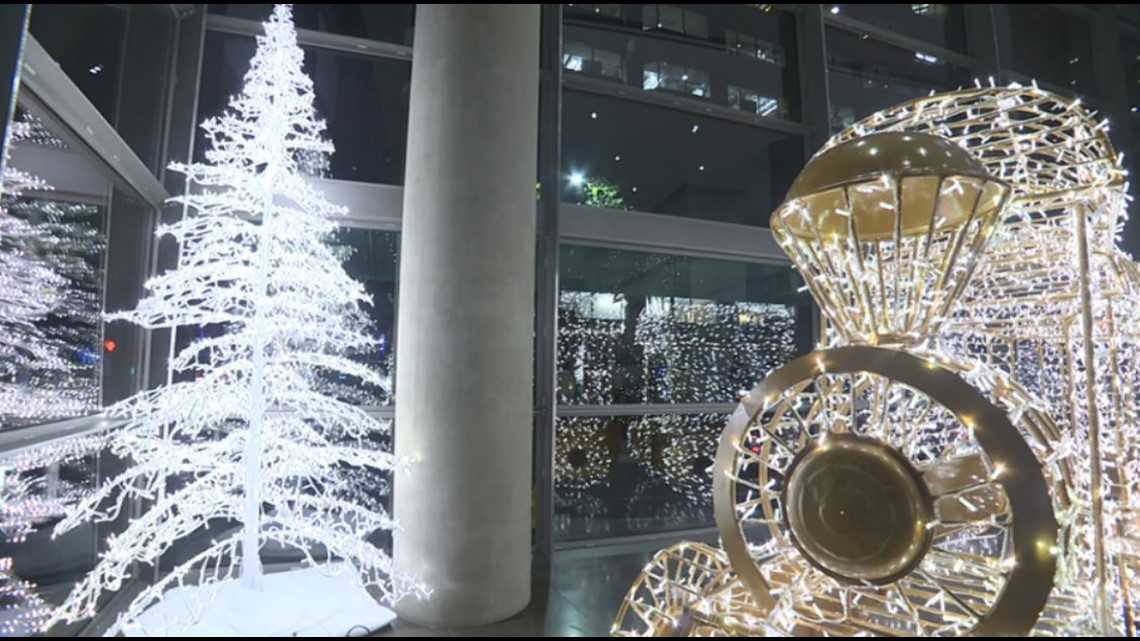 SEATTLE — Hyatt Regency Seattle celebrates its one-year anniversary on December 10th and the largest hotel in the Pacific Northwest already has a holiday tradition. For the second year in a row the lobby is aglow with holiday lights. But these aren’t just any lights.

This is the host hotel of Enchant, the world’s biggest Christmas light maze, which is again taking over T-Mobile Park Nov. 22 through Dec. 29th with its ice-skating trail, holiday vendors and food, and all-around merriment with a show called Mischief.  And the lobby of Hyatt Regency Seattle looks like a mini version of the spectacle right now, with multiple trees, and a 40 foot long interactive train lighting up the space as part of the celebration. In fact, even if you’re not staying, the sparkling lobby lights make it the perfect place to take a pause from holiday shopping, order a drink, and get in a holiday mood.

If you do want to linger longer, the hotel has a special package that includes two tickets to Enchant, and an upgraded view guest room. Early check in at 2:00 pm and complimentary daily valet parking are also part of the Enchant Holiday Package.

There are also food and drink items celebrating Enchant throughout the hotel. At Andare Kitchen & Bar, ‘Mischievous Meatballs’ are on the menu, as well as extra festive desserts, like panna cotta with raspberry gelee and sable cookies with chocolate ganache. Also spotted: gigantic ‘Enchant’ Rice Krispie treats in holiday colors on a bed of white chocolate ‘snow’.

Also included with any stay at the Hyatt Regency Seattle this time of year – all the time you want to play inside of the train made of lights in the lobby.

Credit: KING5 Evening
Saint Bryan, Kim Holcomb and Jose Cedeno aboard the train in the lobby at Hyatt Regency Seattle

To get the Enchant package, book on the Offers Page or use the code LITES when making a room reservation.