Reality star Kim Kardashian and her husband, rapper Kanye West, have just welcomed their third child. And they appear to have named her after a Seattle food truck called Chicago West. 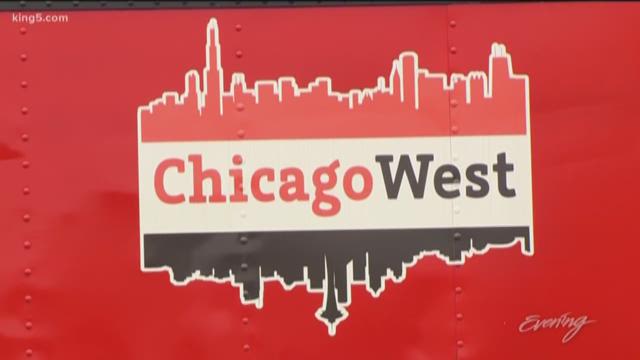 "We are very, very humbled by the fact that someone would name their child after our business," said owner Dave Chester. "It's fantastic."

Chester's business partner and wife, Mellissa, said, "They must have come to the truck at some point, but we did not see them there."

Are they joking? Okay, there's a good chance.

The office workers gave birth to their Chicago West out of sheer food frustration.

Mellissa said, "Two years ago, I was pregnant, and I really wanted a Chicago dog, and so I went to multiple stores trying to find the ingredients, and I couldn't."

The couple set out to offer Windy City wonders to Emerald City diners.

"The beef sandwich, the Chicago dog, the popcorn mix, which everybody loves," said Mellissa. "One bite of that beef sandwich and you'd be naming all of your children after our food truck."

Of course, the star of the show is the Chicago dog with all the fixin's.

Sandwiches at Chicago West, the Seattle food truck that shares its name with Kanye West and Kim Kardashian's new baby.

"It's got the atomic green relish, which is famous in Chicago," Dave explained.

When the owners of Chicago West heard about the birth of the other Chicago West, they were so moved that they named their new Mexican-style corn after her.