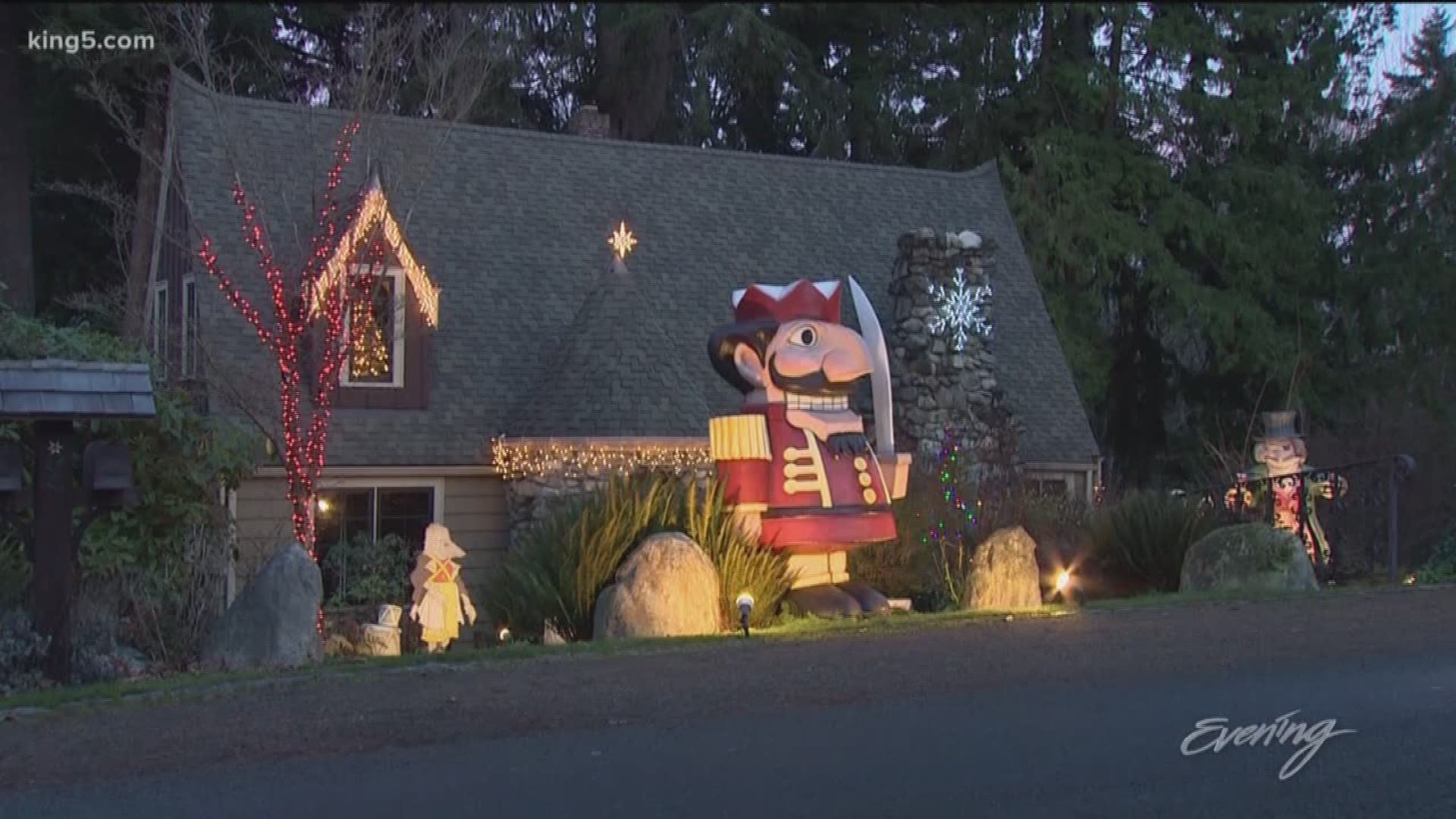 SEATTLE — There are some familiar faces on John Carrington's Seattle lawn:

"We have the Nutcracker and we have the Mouse King and then there is Godfather Drosselmeyer and he's holding a nutcracker and Fritz is trying to get it from him,” explained Carrington.

These figures are well known to anyone who's gone to Pacific Northwest Ballet's The Nutcracker. The fiberglass characters once graced the lobby during the Seattle ballet company’s performances of this holiday classic. Countless people have posed for pictures with them.

Carrington got them from the ballet's prop masters when Sendak / Kent Stowell version of the show was replaced by the George Balanchine version in 2015.

"I just thought rather than have them in the storage warehouse why not bring them out and give them some neighborhood enjoyment!”

Neighbors helped him add a mighty 15-foot Nutcracker this year.

"I was shocked when I saw how big it was when we went to pick it up,” said Jen Clark, who lives near Carrington in Loyal Heights. "And the best part was when we strapped the head down, and we were in two cars driving behind it when we brought it home, it was just this great big smiling head on a truck!”

How did Carrington score these props? They're old friends.

"When I was a teenager and starting to learn the harp I attended the first year of the Stowell and Sendak Nutcracker production at PNB. I used to go to the orchestra pit at intermission and looked at the harpist and just think how cool it would be to do that or play that part."

Today, Carrington is Pacific Northwest Ballet’s harpist. He's played The Nutcracker more than 800 times. And he says it never gets old.

"You know, it is such a genius score Tchaikovsky wrote, it doesn't get that tiring with repeated listening.”

And he knows the familiar notes he plays may be inspiring future musicians. He enjoys seeing kids up at the rim of the orchestra pit, looking down with curiosity just like he did when he was a teenager.

"And every show, it's almost like a live Christmas card for me,” said Carrington.

"Every evening there's one or two people that come up to the pit rail to say hi to me.”

This harpist looks forward to December every year -- because he gets to live and work in The Land of Sweets.

Just don't ask him which version of The Nutcracker he likes best!

"I kind of get the best of both worlds now. I get to play the new Balanchine show and experience that twice a day, and then I get to come home to my house and I'm in the Sendak Nutcracker world. I just get the best of the ballet productions!"

The Nutcracker Lawn is located on Loyal Avenue NW and the PNB's The Nutcracker has tickets available for performances through Dec. 28th