Spring brings a baby boom to Puget Sound Goat Rescue in Maple Valley, where they save male baby goats from being auctioned off for meat. 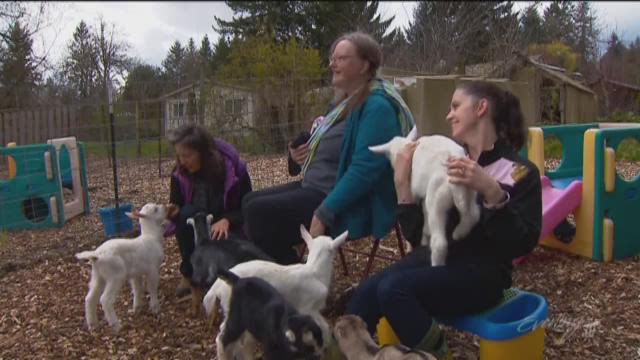 "They're just little cuddle bears! They love people, they're just a riot," said Barbara Jamison about a bunch of baby goats that got a lucky break this spring.

"So what is happening now at all the dairies and breeders, is that does are having babies. So they cull boys," Jamison explained.

Male goats are usually auctioned off for meat -- unless Jamison's organization, Puget Sound Goat Rescue, gets there first.

"We intercept them, we purchase them, we bottle raise them, and then we adopt them out," she said.

It all began in 2000 when she adopted two goats that were abandoned at a friend's feed store.

"I fell in love with them, so I started going to the auctions and buying more."

"Within a month I had sixty, so it was like 'whoa! I can't keep doing this', so I just started putting fliers up, this was before social media, so we just started finding people that wanted to have them as pets."

Springtime is a busy time for volunteers- who serve as pacifiers, and climbing toys for the newborn animals- after paying some farm dues.

"We get a lot of queries where people are like 'We wanna come and help feed baby goats.' And it's like, 'You can, but you've gotta muck too!'" Jamison laughed.

Volunteers get something out of this as well. "It's goat therapy. As soon as you walk through the gates leading up to this property, the world just falls away," said volunteer Vicki Heck.

"What's not to love about goats. I love everything about them. Goats bring me happiness," Cassie Latilla, another volunteer, explained.

The cute overload each spring gives Jamison a great opportunity to educate would-be goat adopters. "Honestly there are a lot of misconceptions about goats out there."

They also take in the occasional sheep, and one rescue llama named Sabrina- whose job is to keep dogs out of the pasture.

Jamison says it's easy to find homes for these guys. "They're just so fun. I don't know how else to say it, they play, they like to hang around with you, they like to walk around. They're like dogs, only they live in your barnyard. Not your house."

But she also admits that sometimes, it's hard to say goodbye to her 'kids'.