Inside Tacoma's 10 Things I Hate About You house

Evening takes you inside the $1.6 million home and introduces you to the family who lived there when it was used for the 90's romantic comedy. 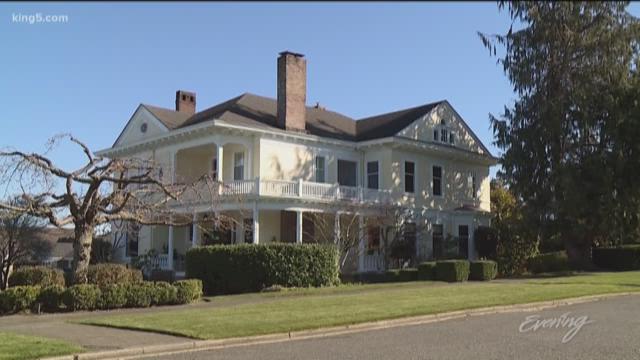 For the first time in 30 years, a five bedroom Victorian home originally built in 1906 for the president of the Tacoma Biscuit and Candy Company is up for sale. But owners Joan and Bill McGovern say it's the 1999 movie 10 Things I Hate About You that has made the house a neighborhood celebrity.

“The movie was huge in Germany and Japan,” Joan McGovern said. “We get visitors weekly. A van will pull up and fans will jump out and just scatter in the yard and just snap as many pictures as they can!”

The McGoverns say the movie was originally going to be shot in San Francisco until one of the producers saw Tacoma’s Stadium High School.

Location scouts were looking at homes near Stadium High School, searching for a dramatic staircase. On North Juvett, they found so much more. For six weeks, film crews took over the house. They bubble wrapped everything to protect the woodwork.

"We said no the first time," said Bill McGovern. "We didn't want the interruption in our life, but they assured us everything would be fine and they did a good job."

A sweeping crane through the front window of the home concerned Joan McGovern most.

“It was kind of scary,” she admitted.

The glass had to be removed so we could see actress Julia Stiles cuddling up with some Sylvia Plath. Heath Ledger would walk along the wraparound porch, and Joseph Gordon Levitt would visit the wood-paneled entryway.

Even so, Bill McGovern wasn't impressed with movie making.

“I found it exceedingly boring,” he laughed. “I'm sorry.”

Inside Tacoma's 10 Things I Hate About You house (Gallery)

1 / 11
This beautiful five bedroom Victorian house is one of Tacoma's most known.

But Joan McGovern found it fascinating, visiting the house every day.

“The day Heath and Julia did the paintball scene on the front porch, I said ‘OK this is the only thing I'm asking for. Can I take my picture with them?”

Her kids, now in their 30s, also got their photographs taken with the stars. For the McGoverns, it's time to move on. The house is up for sale at $1.6 million.

Prospective homebuyers will easily find 10 things they love about the house, including the remodeled kitchen, the back deck, and the view.

A movie may have made her famous but the McGoverns say the big yellow Victorian really shines as a family home.