Get your broomsticks ready, the Rain City Raptors are headed to the US Quidditch Cup

Although they don't actually fly across the pitch, the Rain City Raptors still bring plenty of magic to the muggle version of competitive Quidditch. 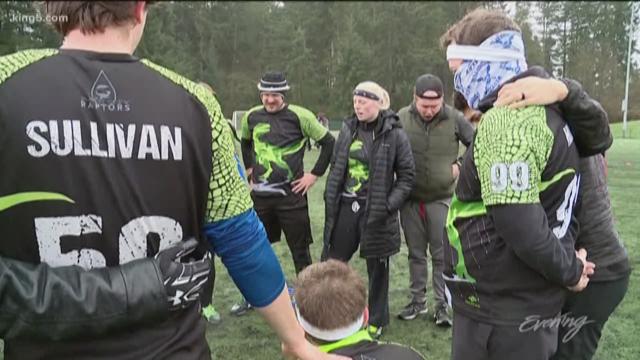 It's a magical sport, pulled straight from the pages of Harry Potter. But in this version of Quidditch, players ride PVC pipes instead of broomsticks, and throw deflated volleyballs and dodgeballs.

"It's a little different playing, what we like to call Muggle Quidditch," said Rain City Raptors head coach and Keeper, Jake Ronhaar. "It is a really good mixture of rugby, dodgeball, and basketball."

Teams from all over the world play Quidditch competitively. There's even a US and World Quidditch Cup tournament (just like in the books!). But these players want you to know that they aren't just a bunch of bookworms who love magic.

"It fits a very niche community that's athletic nerds," said Siri Rigsby, a Beater for the Rain City Raptors. "I don't think people necessarily associate people who like Harry Potter and cosplaying with athletics, and I feel like this shows that physical activity is really accessible for everybody."

The Rain City Raptors are based in Washington but made up of players from all over the Pacific Northwest. Most practices are held in Puyallup in between tournaments. Rigsby and Ronhaar say they always welcome new players because they want to keep the sport inclusive.

The Rain City Raptors have performed so well this season, that they have qualified for the US Quidditch Cup (Quidditch Cup 11) in Round Rock, Texas from April 14-15. They are currently raising money to help with the high costs of travel and tournament fees, and all donation levels qualify for fun perks.