Evening Afloat: How to get out on the water without owning your own boat

All the ways to get out on the water without owning a boat! 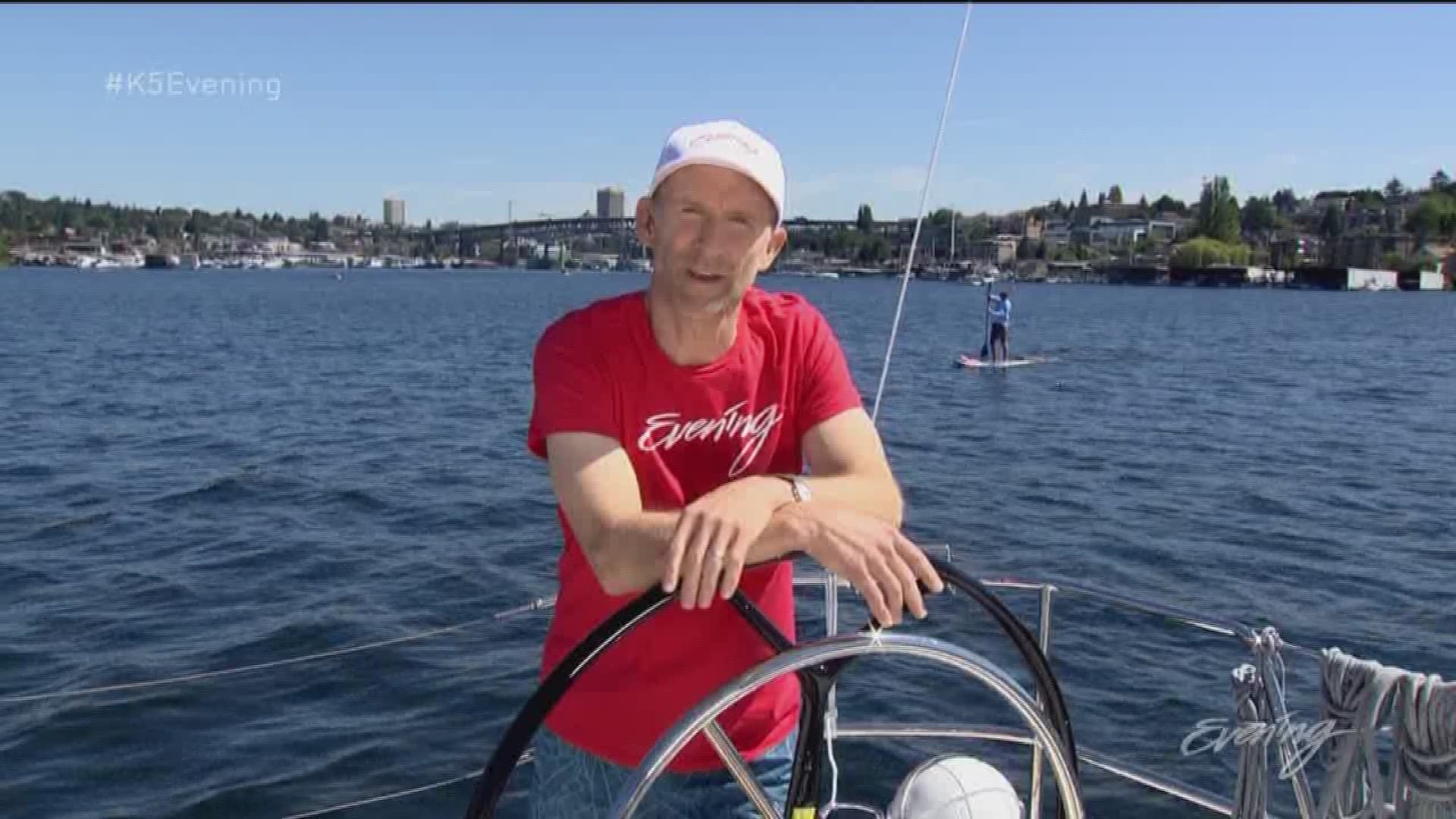 What does it take to skipper your own boat? That's what we find out in this edition of "Dare Dever!"

Sailing was once the pastime of the rich and famous.

But thanks to the Seattle Sailing Club, even a landlubber like Evening reporter Jim Dever can follow his siren song to the open sea.

“You can join the club and use the boats as if they're your own,” said Seattle Sailing Club’s Bob Ross. “No experience necessary. We want you to become a sailor.”

Then, the challenge: Jim will need to skipper a 35-foot J/105 sailboat around a distant buoy and return safely to port.

Then it’s time to put his newfound seafaring skills to the test.

Watch the full video to find out if Jim can successfully complete his dare!

If you'd like to test out your sailing skills, the Seattle Sailing Club can get you started and provide the boat -- just like owning your own but without all the fuss.

RELATED: Seattle Sailing Club gives you the resources you need to sail away on your own this summer

Crabbing is a fun way to catch dinner

Now, you can borrow a boat from Freedom Boat Club to spend the day on the water catching your meal!

To catch one of the Northwest's great meals, lifelong crabber Kate Anderson says you must first serve up a great meal. Of rancid meat.

“It doesn’t smell good to us but the crabs will love it,” Anderson said.

The Sound was angry that morn. When I tossed the crab pot overboard I nearly went with it. Then it was just a matter of waiting, letting the crab pot and the rancid meat do all the work.

We began the day heading out on a Defiance Pilothouse boat.It’s one of 5 boats that members of the Freedom Boat Club can borrow at Elliot Bay Marina. Just a stone's throw from the Sound.

“You can be from car to boat to through the breakwater and on the Puget Sound in 5 minutes or less,” said Freedom Boat club spokesman Nick Hooge.

The Sound was still enraged as I began to haul in the catch, using what is commonly known as brute strength.

“It's fun pulling up a pot,” said Anderson. “There is so much anticipation you never know how many you're gonna get or what you can keep, but you gotta bring something home for dinner right?”

Now comes the moment of truth. How do our crabs measure up?

Compared to the Dungeness crabs we caught, Red Rock crabs are not so tasty so we send them back. As for Dungeness, we're not allowed to keep the females. So they get tossed overboard as well.

There are other rules: we can only go crabbing Thursday through Monday in our particular zone. And we must keep a record of our haul, which added up to four keepers.

"Crabbing is cool because you’re out with friends and you’re dropping crab pots and you’re picking up crab straight from the bottom of Puget Sound,” said Hooge. “You get to take it home and eat ‘em with your friends and make memories that last a lifetime really.’

RELATED: Crabbing is a fun way to catch dinner

15 local restaurants you can boat to this summer

With help from our friends at Carefree Boat Club, we hit up four restaurants in less than five hours (and compiled a list of more than 10 others!)

What better way to taste Seattle’s dining options than by boat?

With help from our friends at Carefree Boat Club, we hit up four restaurants in less than five hours.

"You're out here in the sun, the wind's blowing through your hair, everyone's having a good time,” said Justin Wolff, owner of Carefree Boat Club. “You're always having fun on a boat."

Carefree members pay an initiation fee and monthly dues for access to an array of watercraft, from fishing boats to cruisers.

We set out on a pontoon boat and headed to Agua Verde Cafe in Portage Bay for breakfast.

It's first-come, first-serve and the line is often out the door, so weekday mornings are a great time to pop in. We recommend the raspberry and mango scone, salmon scramble and everything at the house-made salsa bar.

Just about 10 minutes away, you’ll find Ivar’s Salmon House on the north end of Lake Union. Boats can moor at their dock for three hours – plenty of time to sit down inside the dining room.

"During the sunniest days, we have everything from paddle boats to big huge yachts that pull up," said Executive Chef James Somerville.

The to-go window is also a terrific option for people who can’t wait to get back on the water.

On the south end of Lake Union, you’ll find 100 Pound Clam. They serve cold beer and irresistible starters on a picturesque outdoor deck. We recommend the Dungeness Crab Louie Wedge and Poutine O' The Sea.

“It's a great place to sit and enjoy a perfect Seattle day,” said owner Dan Bugge. “The Space Needle is our back drop, the marina, the boats, the seaplanes, it's about as Seattle as you can get."

For evening cocktails and appetizers, Westward boasts what may be the best outdoor seating in the city.

"We like to create experiences here, and I think the place itself helps us play into that,” said General Manager Austin Polley.

The Mediterranean-inspired menu is served in the formal dining room, but lots of boaters tie up just long enough for evening cocktails and appetizers.

Here’s a list of other local restaurants accessible by boat:

RELATED: 15 Local Restaurants you can boat to this summer

Extreme Jose learns how to wakesurf

If you are looking for a more affordable way to experience boating and water sports, FunShare Boat Club’s got your back.

In this segment of “Extreme Jose,” Evening host Jose Cedeno went to Lake Union to try his hand at extreme water sports.

Will Menzies of the FunShare Boat Club gave Cedeno some advice as he attempted wakesurfing. His first tip: wakesurfing is not a sport that’s meant to be taken too seriously.

FunShare memberships start at $199 per month plus an annual program fee. The club takes pride in being affordable and convenient. Members simply reserve their boats online. On the day of their reservations, members do not have to worry about cleaning the boats or bringing them into the water -- FunShare takes care of that before they arrive.

And if you would like to try water sports, FunShare’s got your back. They provide waterskis, wakesurf boards, ropes and life vests.

Take an Argosy Cruise through the Ballard Locks

Even if you lived here your whole life, seeing Seattle by ship can put the city in a whole new perspective.

There are many different ways to see Seattle, but one of the best may be by the sea.

"I might venture to say it's smoother than riding in your car most of the time," said Captain Kristi Schooley of Argosy Cruises.

Schooley has been helping show off Seattle for Argosy since 2004. One of their more popular cruises goes through the Ballard Locks

"The purpose of this tour is really to showcase everything that the Puget Sound and the Northwest has to offer in two hours,” Schooley said. "You get to see the saltwater the freshwater, the mountains, our city skyline."

Narrated by one of Argosy's deckhands, passengers can sit back and take in the city rich history while also soaking up the stunning views.

"The locks are incredible," Schooley said. "What's really astounding about the locks is they are one of the few dams that border fresh water and salt water. We talk about the fact that we are in an elevator full of water. How they work, why they work."

It's a snug fit for the ship, but Captain Schooley welcomes the challenge.

"I actually love it every time I transit through the locks," Schooley said. "It's absolutely astounding to me. It's really exciting for the passengers. It's so exciting for all of us."

But the tour doesn't stop at the locks.

"When we go under the Fremont Bridge, our deckhands have to climb on top of the wheelhouse and lower our antennas, so we clear it by about six inches," Schooley said.

Argosy’s lock cruise has become popular with tourists, but locals can get something from it as well.

"We love it when locals come on board and learn new things about the city that they live in," Schooley said.

So even if you lived here all your life, seeing Seattle by ship can put the city in a whole new perspective.

"To us, the vantage point is unbeatable," Schooley said.

RELATED: Take an Argosy Cruise through the Ballard Locks