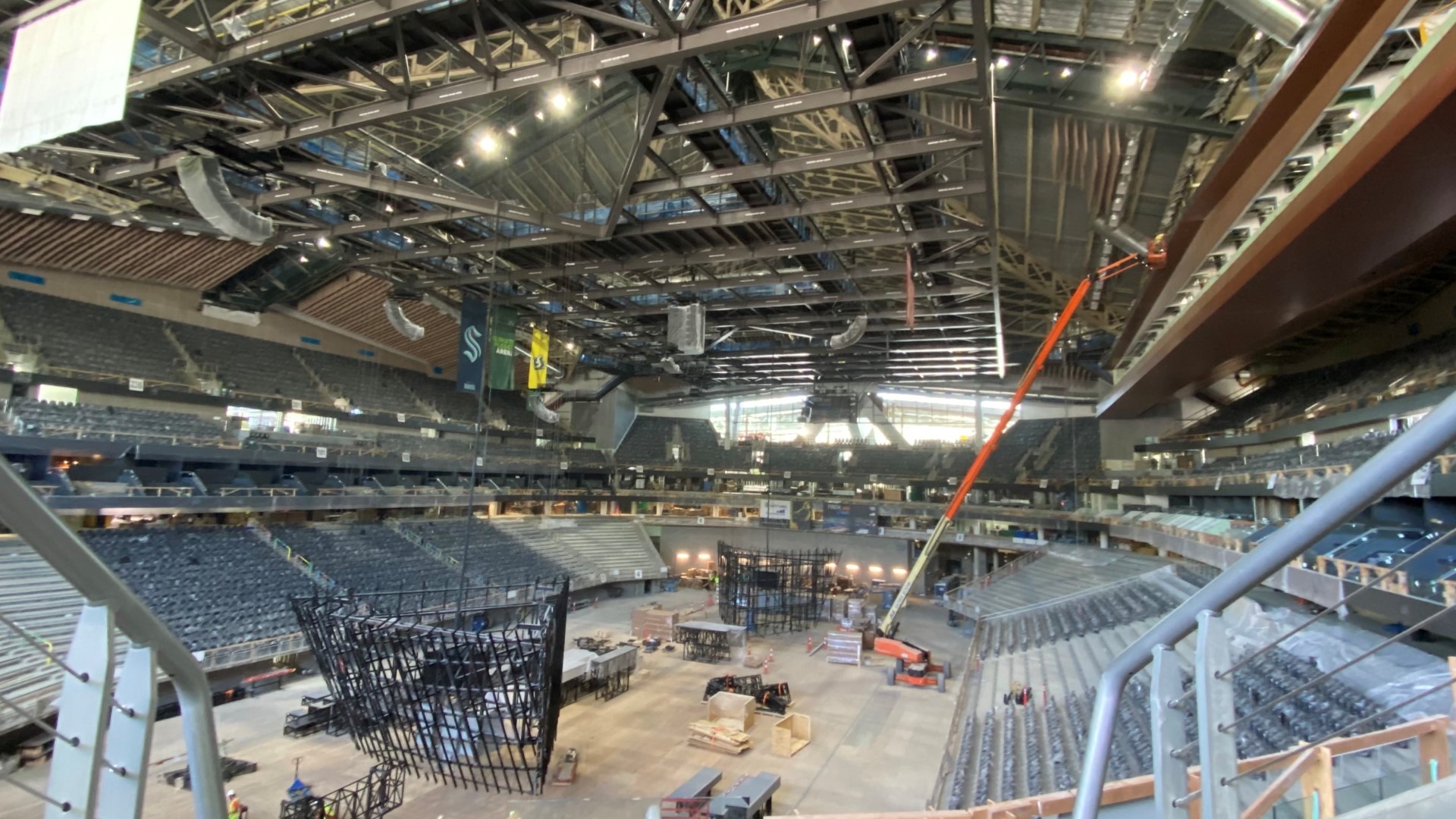 SEATTLE — Looks can be deceiving – especially when it comes to the new Climate Pledge Arena.

A media hard hat tour through the new home of the Seattle Kraken, Seattle Storm, and more than 100 live shows a year offered a glimpse of the space, which has more than doubled from the old Key Arena. It’s now 900,000 square feet.

“That's what you can't see from the outside,” said Sam Morgan, Director of Corporate Partnerships for the Seattle Kraken and Climate Pledge Arena. “If you're just your average person in Seattle and you're walking by the project, you're like, ‘Wow, that doesn't look much different.’ But as you all experienced when you walk in the venue, it's just absolutely breathtaking."

Crews dug down 15 feet, and out, to create 450,000 more square feet of arena space. In the spirit of the venue’s name and mission, they also focused on sustainability.

“There’s natural light that comes through all the windows from old Key Arena, all the glass and the 44-million pound roof was all recycled,” Morgan said. "Believe it or not, not one window broke. It's unbelievable."

The 17,000 seat venue has a cathedral-like atmosphere. There will be two scoreboards and Morgan said "not a bad seat in the house."

When fans cheer for the Kraken - or whatever event brings them to Climate Pledge Arena – they’ll be able to raise a glass of locally-made wine.

Ste. Michelle Wine Estates is the official wine partner of both the Kraken and the arena.

"It seems like such a natural fit. You've got both of us share the same values, with community sustainability at the heart of what we do,” said David Dearie, President and CEO of Ste. Michelle Wine Estates. “This opportunity for us being an older established Washington institution, teaming up with the excitement of the new Washington institution, it seemed like a natural fit."

Their products will be featured throughout the venue, including inside a 14 Hands Marketplace right next to the main entrance and an exclusive fan experience on the suites level.

Suite attendees can visit The Chateau which will carry Ste. Michelle Wine Estates’ entire portfolio and a 2017 Cabernet Sauvignon, only available at Climate Pledge Arena.

Both the vintage and varietal were purposeful.

"2017 was the 100th anniversary of the Metropolitans winning the Stanley Cup, and we picked cabernet because it's the king of red grapes,” said Juan Muñoz-Oca, Chief Winemaker for Ste. Michelle Wine Estates. "This is actually bringing the winery to the fans."

Chateau Ste. Michelle also produced two etched 9-liter bottles of the wine, one of which will be auctioned off at the 2021 Auction of Wines 2 Wines. The other will be cellared at Climate Pledge Arena and opened when the Seattle Kraken win their first Stanley Cup.

"I think what we're looking forward to the most of this partnership is longevity," Dearie said. "It's helping us bring the community together, specifically after what's happened in COVID... Great wine and great spirit."

Both the arena and Kraken make their debut to the public in October 2021.