Schurman Rock at West Seattle's Camp Long, has been serving as a training ground for climbers of all ages and skill levels since 1938. 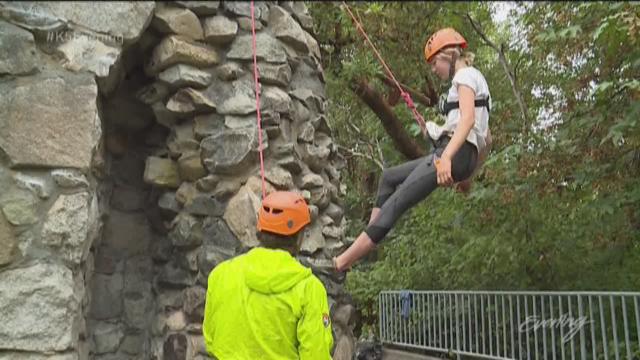 Schurman Rock at West Seattle's Camp Long, has been serving as a training ground for climbers of all ages and skill levels since 1938.

"There's not a modern gym in the country that has this sort of history," said Mark Gunlogson, who serves as President of Mountain Madness.

Clark Schurman, an avid climber and scoutmaster, dreamed of creating the structure as a way provide a safe place for novice climbers to harness their skills. Each stone was placed strategically to recreate any potential climbing problem.

"There's gravel to jump off on so if you get a little too high you can come down easy," Gunlogson added. "There's a lot of easier climbing routes on it. So it's not as intimidating as a rock gym where you have 50 ft walls."

A notable cast of climbers scaled Schurman Rock in their early years, including Jim Whittaker who was the first American to climb Everest. Fred Beckey, who Gunlogson says is the most iconic in the climbing community, also climbed Schurman Rock. Beckey, who at 87-years-old is still climbing, has even become the subject of a new documentary, "Dirtbag: The Legend of Fred Beckey".

Gunlogson said he's been coming to Schurman Rock since he was 14 and now lives only three blocks away, meaning he's a regular at the historic site.

"It's such a great resource," Gunlogson added. "I'll come here and there'll be nobody here and I'll have the rock to myself. I can get some exercise. It's just very peaceful."

On Saturday, Sept. 10, Schurman Rock will be a focal point of the third annual Mountain Fest, which also celebrates the 75th anniversary of Camp Long. The event is free and runs from 11 a.m. to 5 p.m. Gunlogson says he hopes the event will bring awareness to the various activities available at Camp Long, and also inspire a new generation of climbers to get their feet off the ground.