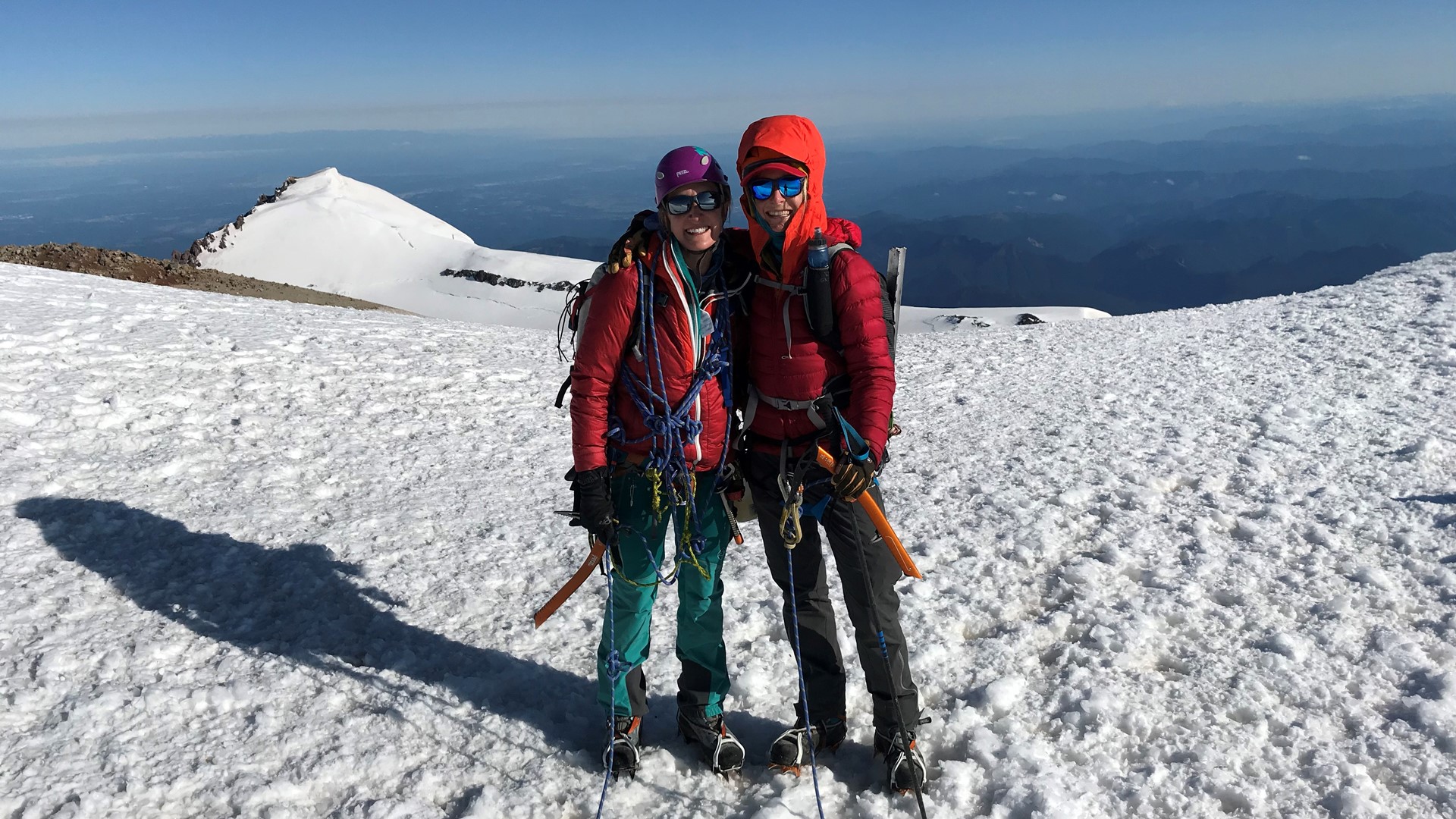 SEATTLE — Most of us live a cushy life...comfy chairs, coffee shops, and maybe even air conditioning. But what happens when all you got is you, your best friend, and a mountain?

"This is really cool. This is really wild. I can't imagine ever doing this," said Alex Borsuk, as she contemplated attempting the Rainier Infinity Loop.

Just this summer, Borsuk and Kaytlyn Gerbin became the first all-female team to complete the epic feat, an unofficial but much-coveted event that tests every mountaineer/runner's mettle. It's called infinity, because that's what it feels like when you're in it. And you almost mimic the infinity sign.

It's four legs. You summit Mount Rainier, then descend on the opposite side. Then run about 30 miles back to your starting point. Climb the same mountain again. Back down, then run the 70-mile Wonderland Trail around the mountain.

"I think the idea is a continuous loop. So doing it all in one push," said Borsuk.

Borsuk was the one who convinced her climbing buddy Gerbin to give this insane concept a go.

But Borsuk was the first to run into trouble on the second leg, the 30-mile run.

She had "bonked," in runner's terms. Gerbin transformed from runner into cheerleader.

"Anything that long, we know we're both gonna have highs and lows," Gerbin said. "So then trying to figure out how can I support her and try to stay positive but also be patient and work together and not get upset."

Borsuk did all she could do...put one foot in front of the other.

"I just kept moving forward," she said. "And I finally got to the car. We took an hour nap. Ate some food. Did a few minutes of dry heaving. Then felt better."

Crisis averted, they charged on. And up. Back up Rainier for the third leg of four. After four hours of climbing, "there's this giant storm cloud basically circling and swirling over the top," said Gerbin. Experienced mountaineers, they realized though they are just a thousand feet from the top, they have to go back down.

"Even though we knew that was really our only option at that point? It was still a bummer," Gerbin said.

They waited out the storm and back up they went, entirely self-supported.

"We weren't seeing people. No one met us to give us more food or gear or anything like that," said Gerbin.

RELATED: 10 essentials every hiker should have to stay safe on trails

The final leg was 70 more miles around Rainier.

"It was one of those things I thought about but kind of put on that bucket list that I thought I would never accomplish," Borsuk said.

But after two major climbs, four marathons worth of running, and five hours sleep, they made it, literally connected at the hip.

"I mean we spent 100 hours together? And many parts of that like physically tied on a rope together. There's no escaping. Cuddling on the side of the trail together," said Gerbin.

They left at 10 p.m. on a Thursday and stumbled back early Tuesday.

"We had all these ideas of like how amazing that would be. But in the end, we ended up finishing hours later than we thought – close to 2 a.m. We were so tired. So we show up there. And of course there's nobody there except for our husbands, which was awesome to see them. But I think we were just so tired at that point, we just kind of walked right past them. And kind of laid down on the stairs," Gerbin recalled.

Four days, four hours and a few minutes. Closing the Rainier Infinity Loop. In a video taken by their husbands, one asked, "Hey, what'd you guys just do?" Gerbin replied from a prone position on the ground: "Undoubtedly the hardest thing I've ever done. I can't even comprehend what we did."

"And then we took a nap. And then drove back to work the next day," Borsuk said.

And while they downplayed the fact that they are the first female team to complete the feat, they hope to see more women on the trail.

"I hope that it feels like it's almost an inspiration for someone to grab their female partner and be like, let's train for this. I want to do this. Let's focus on developing new skills together, because there's no reason that you need to bring on these things. It's more, the community is definitely more prevalent, there's a lot more guys in climbing and mountaineering. But it doesn't mean that has to be the norm."