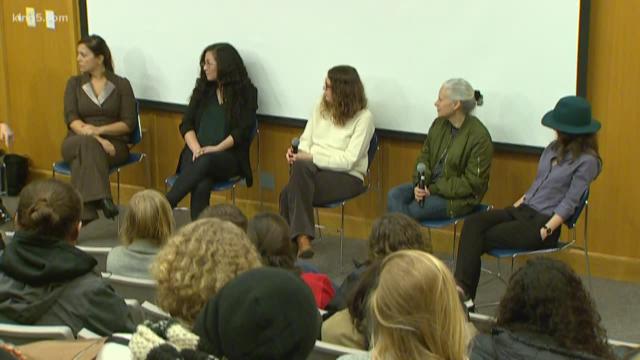 Five local women who work in the film industry gave their firsthand account of what the industry is like, in the wake of the #MeToo movement.

“It is a sexist industry,” said Anne Rosellini, producer of the Oscar-nominated movie Winter’s Bone. “Women are asked to uphold an impossible standard.”

“There is an awakening in the industry,” said Turquoise Washington, a Seattle University senior who wants to become a casting director. “I guess I could take something from this panel as what I can expect and hopefully not expect since this is now in the forefront.”

Her friend, Linh Bui, an aspiring actress, also wanted to hear from the industry professionals.

“I think this is important to know what they’re going through in the industry, but it also has brought light to other women who experience these types of things in other realms of work as well,” she said.

“Nearly two-thirds of the students in our program are women,” she said. “Which is really exciting for the future of filmmaking, but we feel a sense of obligation in terms of preparing them.”

Rosellini said her #MeToo story happened before Hollywood, when she worked in the art industry.

“This was my dream job as a 19-year-old, and I just remember feeling the injustice and the rage that because I won’t do this, I don’t get to have this job,” she said.

Jennifer Roth, executive producer of the Oscar-nominated film Black Swan, said her experience in Hollywood has included a lot of men with short tempers.

“I think the other side of this sexual harassment is the unbelievable anger that’s a tip-off,” she said.

“The thing men need to do is be willing to check each other,” he said. “We cannot treat these behaviors as normal, simple, ‘boys will be boys’ activities, but activities that damage women in our lives.”

The main message was to take the industry’s current issue and take action moving forward.

“For you all, as young filmmakers, you get to create your community that you want,” Nancy Chang told the crowd. Chang is Executive Director of the non-profit Reel Grrls. “We have opportunities to create the types of workplaces and cultures that we believe is inclusive and safe and values all types of identities and voice.”